If you were a teen in the late nineties/early naughties then you would have seen Bring It On (the film) at least a few hundred times. It told a story about two rival cheerleading squads out to win the national championship in cheerleading. There were characters seeking to fulfil their dreams, love triangles, spirit finger jokes and a lot of blonde hair.

Now Bring It On: The Musical did cover some of that, but what I didn’t realise was that it was an ORIGINAL story, not a remake of the movie. This isn’t good or bad, but it just means you don’t need to rewatch the film beforehand to compare the two.

Bring It On: The Musical centres around two female leads; one a preppy cheerleader Campbell and her rival, a hip hop dance squad leader, Danielle. We follow the story of Campbell losing her coveted title of Cheerleading Captain, and the subsequent lack of popularity and loneliness that follows. She finds an unlikely friend in Danielle and together (with some back up) they go on to kick some cheerleading ass. 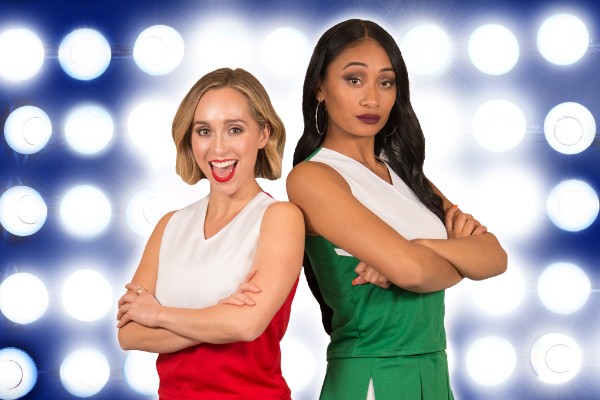 So it’s a new story…ok… why should I go and see it then?

Because the dancing and cheerleading skills were amazing! The cast is made up mostly of Australian musical theatre stars, but there’s also a few extras with them on stage. Some members of the chorus have been flown in from the real world “World Cheerleading Championships” in Orlando, Florida. The stunts are impressive as you might imagine.

Also, Bring It On: The Musical  is crazy funny… and you can take wine ($10 a glass) into the theatre. Don’t mind if I do… twice!

Bring It On : The Musical is super kid friendly too. Cheerleading is currently one of the fastest growing sports in Australia so expect to see a lot of primary aged kids in the audience. There’s no swearing, almost one tiny drug reference which is a joke, and nothing sexual going on. Well, except for the odd bit of booty shaking!

I had a really fabulous Mum night out with one of my best girlfriends. We wined, we laughed, we reminisced those high school years, and just had silly fun!

This musical is full of crazy talent but also doesn’t take itself too seriously. A fab combo, and one that appealed to my sense of humour greatly.

Bring It On : The Musical is running until June 23rd at the Athenaeum Theatre. There are still some tickets left, but get in quickly before they all sell out.